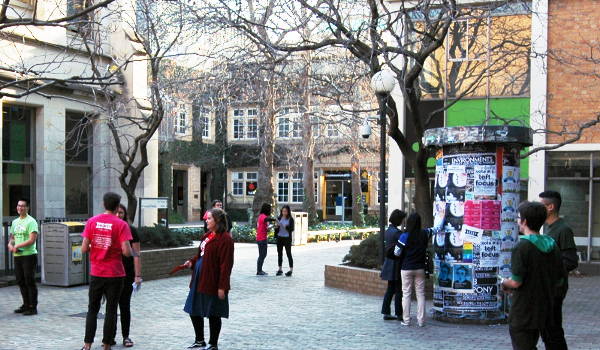 UMSU elections kicked off today, as widely reported in Parkville Station, seen on the Facebook newsfeeds of those unlucky enough to be friends with campaigners, and felt by anyone trying to enter Union House, the Baillieu Library or the FBE Building today.

The number of votes today, 664, was the highest turnout for an election Monday since 2009 (which recorded 700 votes on the nose).

The general sense from campaigners today was that they’d had a good (if somewhat tiring) day at the hustings, regardless of ticket.

There was a good turnout from most major tickets today: we spotted campaigners from More!, Stand Up!, Left Focus, Create, Independent Media, the Whigs and Activate.

Overall, the Returning Officers seemed to be pretty happy with behaviour so far, handing out a couple of hour-long bans to individual campaigners but by and large not seeing large-scale misbehaviour.

The Whigs were particularly pleased, ebulliently describing it as “an excellent first day”; most other tickets were slightly more circumspect, although we were certainly able to extract at least a “it’s been a good day” from all the tickets of which we saw evidence of campaign presence.

The day saw Returning Officer Charles Richardson issue his second ruling of the election, considering a violation of Regulation 44.4, which prohibits “[a]ny inducement, whether financial or otherwise” to get someone to vote for you — in this case, the ‘otherwise’ inducement being free pizza. The Returning Officer upheld the complaint, and as a consequence has banned More! campaigners Martin Ditmann and Nicholas Lam from campaigning for the first two hours of polling tomorrow.

More! told Parkville Station that they respected the decision of the Returning Officers, and stressed that they believed they were acting within the boundaries they’d discussed with the Returning Officers. Despite plenty to be said in mitigation for their breach of the regulations, we tend to think they’ll be feeling happy to a receive, on balance, a light penalty.

One of Stand Up!’s two candidates for Welfare Officer, Xu (John) Zhang has withdrawn from the ballot. Since John ran on a joint ticket, his co-candidate Claudia Lombard remains on the ballot and, if elected, will take up the position as sole officer. Stand Up! were not able to comment on the reason for the withdrawal.

And lastly, a snafu with a printer saw Activate not receiving their how-to-vote cards in time, requiring them to practice “double recycling” (recycling being strongly encouraged by the regulations) by re-using how-to-vote cards from last year. We’re told their new 2016 HTVs will be arriving some time tomorrow.