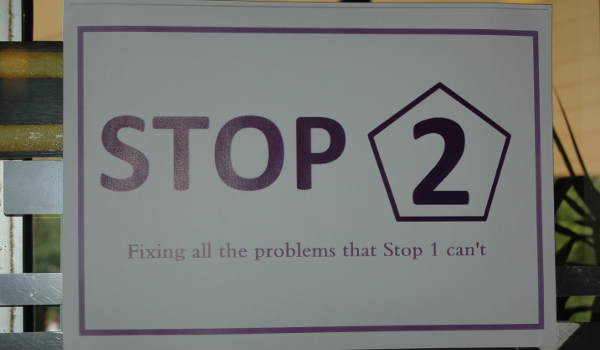 The much-anticipated bar on the first floor of Union House took a small step towards becoming a reality on Wednesday 27th July, with the University of Melbourne Student Union (UMSU) Activities department running a clubs and societies week 1 pub night in the bar, in conjunction with the Melbourne Arts Students’ Society (M-ASS), the Science Students’ Society (SSS), the Melbourne University Engineering Students’ Club (MUESC), and Envi, the faculty club for Environments students.

One attendee described the event as “easy and quick to get a drink, it was cheap, and I was happy”, but noted that it was the “usual crowd” in attendance.

UMSU Activities officer Itsi Weinstock told Parkville Station that he intended the event as a prelude to regular pub nights, which are currently planned to run each Thursday evening from 5pm to 10pm.

At the series of pub nights, the bar is being called “Stop 2”, a riff on the University’s Stop 1 single student centre. We understand the name was proposed originally as a joke that has gained currency.

Despite the name and a proclamation on the Stop 2 Facebook page that “Stop 2 […] is going to be a real pub”, the weekly event is presently being run through UMSU’s Activities department, rather than by dedicated staff or a dedicated business unit within UMSU.

UMSU President Tyson Holloway-Clarke stressed to us that the process for formally opening a bar in the space was ongoing, and that the organisation considered the weekly space use to be a series of events organised by UMSU Activities, and not a substitute for the eventual opening of a bar.

Despite that, Weinstock was confident that the pilot would be a success, and told us he was hopeful the bar would be able to expand to two nights by the end of semester with a view towards opening all week starting 2017.

The bar will serve alcoholic beverages (perhaps not a revelation requiring a lot of journalistic effort), and food will initially be provided by a vending machine, although Weinstock says that he is actively investigating options for running the space’s kitchen.

Weinstock told Parkville Station that the pub night was “an experiment”, and that at least to begin with, would “not be a commercial enterprise” and would aim to break even, after paying for the cost of goods, staff and, eventually, the kitchen.

Anna, a third year Bachelor of Arts student, described the plan as “intriguing”, saying that she was “kind of surprised they’d invest a lot in the space” given the time limit before UMSU’s occupancy of Union House ends in 2018, but was “interested to see how it goes and how it differs from what it was”.

Last semester, Parkville Station reported on he story of the “UMSU bar” so far: formerly a commercial tenancy, the space was returned in late 2015 by the former tenants Harajuku Crêpes (“HJC”) to MU Student Union Ltd (the confusingly-named, University-owned company that is responsible for, among other things, managing tenancies, facilities and infrastructure in Union House).

UMSU then established a “Bar Steering Committee”, charged with responsibility for preparing a project proposal and submitting that to the Students’ Council. We understand that the preferred model involved a separate, but UMSU-owned, organisation that would manage all aspects of the space.

The Steering Committee commissioned a report from retail consultancy firm Red Design Group, although the result of that report was never made public. UMSU declined a request by Parkville Station to see a copy of the report, citing concerns about commercial confidentiality.

Since then, however, work seems to have ground to a halt. The Steering Group has met only once since the start of semester 1, and no minutes of decisions of the group are on UMSU’s website.

Weinstock told us his current approach was borne of the “frustration” he felt at that process. He specifically cited concerns that the Students’ Council, UMSU’s peak governing body, had about taking on the risk of an unsuccessful project. According to Weinstock, “the problem comes down to: there needs to be someone to get all of [the project] together”.

UMSU President Tyson Holloway-Clarke conceded that progress was “slow”, but felt that the Bar Steering Committee was continuing to do its work, with “tasks […] delegated to members of the Steering Group, including redeveloping the business plan with the consultants and advertising for a bar manager”.

Holloway-Clarke is confident the Bar Steering Committee process will bear fruit, believing opening the bar “for 2017 is realistic and we are on track to deliver”. It remains to be seen how any expansion of the Activities pub nights will fit around other users of the space, such as clubs and UMSU departments, and what will happen to it when the Bar Steering Committee’s bar opens.

Holloway-Clarke said he was “happy the space is starting to be utilised” and that “student led initiatives have access to new facilities”, pointing out that being “within range of a Pokéstop” was a huge feature of the space. That said, in this case, Weinstock might be the one to turn this into Pokéstop 2*.

* we are no good at Pokémon references.