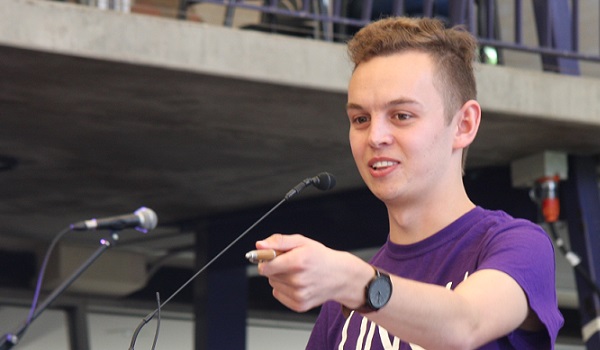 The University of Melbourne Student Union (UMSU) held a Special General Meeting (SGM) last Tuesday to consider various changes to its Constitution. As reported online by Parkville Station on the day, two of the nine motions failed to pass – one regarding how the honorarium (wage) for the elected Media Officers is determined, and one that would see the spelling of the word “calendar” corrected in the document. See our previous article for a full list of motions passed and failed.

The SGM is constitutionally required to have 400 students present, though those students are not required to participate in voting. Getting this number of people in the same place has been traditionally met by holding the SGM at the same time as a Tuesday BBQ on North Court, and indeed the same tactic was used last Tuesday. This practice has faced criticism from students claiming that the process is undemocratic, with one describing the event as a “farce”.

The meeting began with a declaration that quorum had been reached – meaning that 400 students had been counted as being on North Court, but the number of students engaged and voting was as low as 30-40 (varying slightly depending on the motion being considered). Exact numbers are unknown, with SGM Chair and UMSU General Secretary and Interim President James Bashford explaining that “margins aren’t usually recorded for votes at an SGM” and that “it’s quite clear if votes have passed or failed from a show of hands so it’s not necessary to actually count the votes”.

Bachelor of Arts student Guy Coward, who currently serves on the Creative Arts Committee at UMSU, spoke at the SGM about the need for more transparency in the organisation, arguing that the amendment which would remove the requirement for UMSU agendas and minutes to be posted on noticeboards in Union House would reduce already limited transparency. Though the motion eventually passed, Coward stands by his claim, and argues that “the Union needs more transparency, more engagement – it needs to spruik”. He added that the lack of transparency was part of a bigger problem, lamenting that “it just seems that no one cares. The Union knows that no one cares. And then they take advantage of that.” To Coward, “Students Council and UMSU more generally are seen as a self-serving body that acts separate to the student body.”

Bashford holds a different point of view. While acknowledging that “there’s always more [UMSU] can do” in terms of engagement, he says that student reps actually care “a hell of a lot” about engaging the wider student population, citing especially the email that was sent by the University on March 8 to all students regarding the holding of the SGM. This was the first time in Bashford’s memory that the University had sent such an email, and it was due to pressure from the Union that the University agreed to send it. He also noted that posters had been put up, and that the SGM had been advertised in the UMSU newsletter. He commented that “[c]learly that didn’t lead to as many students getting involved as we’d like so next time we’ll have to do more”.

Coward agrees on this latter point, saying he didn’t believe that the SGM was advertised well enough, and that “if they were seriously wanting to get 400 people engaged”, they’d have started earlier, and tried out more means. However, he does admit that he doesn’t know himself how he would go about changing the constitution, but that that doesn’t stop him from stressing that there should be a “big long think about it”. Bashford has some ideas for improving engagement, stating that where he’d seen the greatest engagement last year was when the Queer Department at UMSU worked on looking at the constitution with an eye to finding things that directly affected them, and then working within the collective to develop changes. A similar process is being followed by Adriana Mells, one of UMSU’s Wom*n’s Officers, for changes being considered for an SGM later in the year.

With the exception of motion 2.8 (regarding spelling of the word “calendar”), where some students in line for the BBQ joined in the vote against the motion to correct the spelling, engagement in voting was limited largely to UMSU Officer Bearers and Students’ Councillors. The fact that this is largely the same group of people who put together and endorsed the changes is part of the reason Coward believes that UMSU is seen as self-serving body.

Bashford doesn’t deny that the group is similar, noting that student engagement with the Constitutional Working Group (CWG) who deliberated on the changes was mostly from students already involved in UMSU, and adding that that is “often the case with these sorts of things”. He argues, however, that presenting the changes to Students’ Council for endorsement – which isn’t required – is “a good additional step”. Students’ Council, Bashford notes, “has a diverse membership and is specifically elected for the purpose of representing the wider student body, so it’s a powerful test of support for any proposed change”.

UMSU has formed another Constitutional Working Group to consider further changes to the organisation’s constitution. The group’s next meeting in the UMSU Officebearers’ Space (first floor, Union House) at 10.00am on Thursday 14th April, and all students are welcome to attend.

Read James Bashford’s full responses to our questions here. James Bashford welcomes input, and can be reached at j.bashford@union.unimelb.edu.au or on 8344 6973.

Do you think the SGM was democratic? Got ideas for how UMSU could represent you better? Drop us a line at letters@parkvillestation.com.