Is Cadmus watching you? 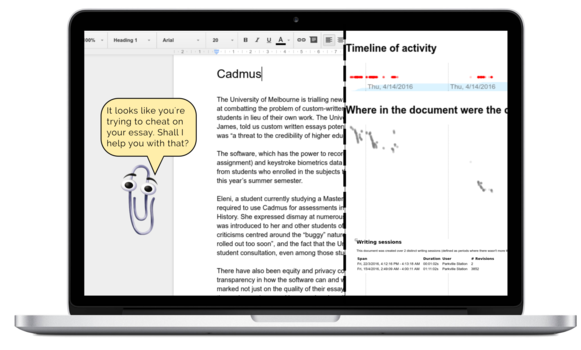 Disclaimer: We were not able to get access to the Cadmus software, so we used guesswork, Google Docs and Photoshop to create this totally faked pastiche, above.

The University of Melbourne is trialling new anti-plagiarism software, called Cadmus, aimed at combatting the problem of custom-written essays being purchased and submitted by students in lieu of their own work. The University’s Pro Vice Chancellor (Academic), Richard James, told us custom written essays potentially represented a “sector-wide problem” that was “a threat to the credibility of higher education overall”.

The software, which has the power to record session times (when you’re working on your assignment) and keystroke biometrics data about users, has received substantial criticism from students who enrolled in the subjects that trialled the system this semester, and during this year’s summer semester.

Eleni, a student currently studying a Master of Urban Planning here at the University, was required to use Cadmus for assessments in her first semester subject Planning Theory and History. She expressed dismay at numerous aspects of both the process by which Cadmus was introduced to her and other students of the subject, and the software itself. Her main criticisms centred around the “buggy” nature of the software, stating it had “definitely [been] rolled out too soon”, and the fact that the University had rolled the software out without any student consultation, even among those students who had to use it in their assessment.

There have also been equity and privacy concerns, as well as concerns on the lack of transparency in how the software can and will be used, with fears students would be able to marked not just on the quality of their essay, but also on things like how close to the deadline the work was done, and how much or how little time was spent on it. These fears, while real, look like they probably won’t be realised. Tom Crowley, one of the University of Melbourne Student Union’s Education (Academic) officers, says that the department has received assurances from the University that “there is no intention to provide Cadmus data to tutors”, but this information has clearly not been communicated to students required to use the software.

Cadmus has been described as a “Google-docs style environment”: it’s an online web application, and the documentation on Cadmus provided to students in one subject described it as “a University regulated assessment area; as such we ask that all work be completed within [Cadmus]”. That is, students completing work in subjects using Cadmus are expected to complete that work, including all drafting, while logged in to the system.

According to that documentation, in order to use Cadmus, students must first install an app on an Android or Apple-based smartphone. The phone is then linked to a website which asks students to answer a number of questions (unrelated to the subject being assessed). These questions are used to “train” Cadmus to “understand how you work”, which we take to mean is used to establish a biometric keystroke profile.

A key feature of Cadmus is that it provides immediate “educative” responses: for example, if you copy a segment of text into Cadmus, it will warn you that “if you want to present a large section of someone else’s ideas, it is often best to paraphrase” and a link to the University’s plagiarism policy. (As you can see, we followed Cadmus’ advice in putting quotation marks in the segment of text above that we copied.)

This caused problems for some students, who reported difficulties moving text around their essays. Additionally, students have reported that Cadmus isn’t currently compatible with other common academic software, like Endnote, which saves student time on formatting citations when writing essays. Combined with the inability to copy and paste, this made referencing “hell”, according to Eleni. She further commented that assessments took “about a third as much time again to complete” when using the software. Bachelor of Arts student Harry seconded this notion, stating that the software “made life difficult” when writing a 500 word assignment, and that he’d “hate to do an essay or report on it”.

“[I]t made life difficult and my assignment was only 500 words, I’d hate to do an essay or report on it”
— Harry, student who has used Cadmus

The system includes a wide variety of features one would expect from a modern word-processor, but was criticised as “similar to [Microsoft] Word, but a lot clunkier”, according to Harry, who used Cadmus in an Environments breadth subject. Images have to be hosted separately and were apparently a particular sticking point, with one report reaching us that the images were present when writing the essay, but the links to the images had expired by the time the essay was marked.

Richard James talked to us in detail about the University’s motivation for trialling Cadmus, as well as addressing some of the concerns that have been raised. In particular, he told us that the University had collected positive feedback from Student Experience Survey (SES) data. Those students that we interviewed expressed a different view, with one stating that they “didn’t know anyone who had a good experience with [the software]” and that there were “positive cheers from the full theatre” when there was an announcement about a cancellation of the trial.

James was receptive to student concerns – and Crowley acknowledges this, noting the University is now working “constructively” with the Education office – emphasising that Cadmus’ trial was an “exploration” of how to solve the problem, and that concerns about the functionality were “unfortunate, but unsurprising for a trial” and was confident that they could be solved before the system was rolled out more widely. Crowley, however, is “extremely disappointed” that live trials happened initially “without any discussion and without full functionality”. Regarding equity and accessibility concerns, James told us that the University was actively considering how the system might be used without an Internet connection (for example, to work on public transport), emphasising that “all students need to have suitable access to the system, or some suitable alternative”.

James told us the University doesn’t have a clear idea on how prevalent essay-buying is, pointing out that the higher education sector as a whole “doesn’t have any way of measuring it”. However, he saw the main threat as being to the credibility of a degree certified by the University of Melbourne: “the incidence could be low, but it remains a big issue in devaluing everyone’s degrees”. Crowley would prefer hard evidence to justify Cadmus’ rollout: “…a general assertion that plagiarism devalues a degree at the University of Melbourne is surely a less credible platform on which to base such a significant change.”

In late 2014, a company called MyMaster was found facilitating essay buying for a number of universities in New South Wales, with Fairfax’s Sydney Morning Herald estimating the organisation had an annual turnover exceeding $160,000. Macquarie University was the hardest hit, with its investigation resulting in two students having their degrees revoked, and a number of other students being prevented from graduating.

Many subjects across the University require essays to be submitted through Turnitin, a U.S.-based company which checks submitted work against Internet sources and other published work. While Turnitin also has a large database of previously submitted work, it is ineffective at catching bespoke essays purchased from so-called “essay mills”, many of which offer money-back guarantees if plagiarism is detected. Turnitin has also been criticised in the past for retaining copies of student essays after the student has finished the subject, with critics claiming a large part of the service’s value derives from its database of previous submissions, which have been gathered without compensating the submitting students.

Cadmus aims to address Turnitin’s disadvantages by profiling users’ keystroke patterns. Keystroke profiling, or “keystroke dynamics” is a relatively new technology, aimed at identifying who is typing through each individual’s “dwell time” (how long you hold down a key) and “flight time” (how long it takes you to get from one key to the next). We have been told the system is also able to distinguish between typing an essay from scratch, versus copying it from (say) a printout. Research published in 2012 suggests similar technologies are approximately 95-98% accurate, depending on the exact method used.

We have contacted the developers of the system, but had not received a response by the time we went to print.

Similar keystroke biometrics are also used by massively open online course (MOOC) provider Coursera to verify identity for “signature track” candidates, who pay to take its courses and receive a verified certificate containing their mark. The University offers some subjects through Coursera, although not for credit towards its on-campus degrees.