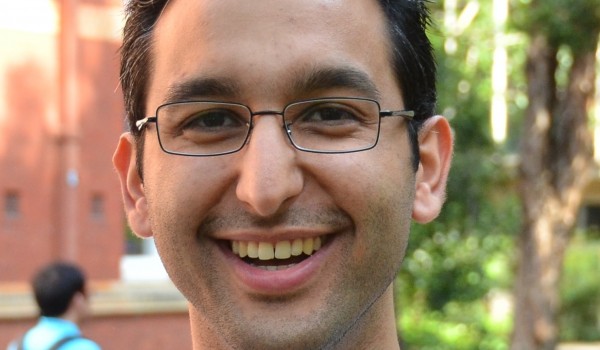 The Graduate Students Association (GSA) has recently elected its third President in a perhaps tumultuous period of its leadership.

We spoke to the new man in the top job, Sina Khatami, on what he has planned.

Liz Peak, Parkville Station: So, firstly, do you want to tell us a bit about yourself as a student of the University?

Sina Khatami: Sure. So I moved in two years ago to Melbourne to start my PhD in water resources engineering at the department of infrastructure engineering, and since then I was a graduate student here. Then, in early 2015 I joined GSA as a casual councillor, then I got elected in the general election for a term of two years and then I was the International Officer until a while ago when I became the President of GSA.

LP: Perfect. OK, so tell me a bit about the GSA. Why does it exist, what does it do?

So, we have the PTV campaign, which is for the welfare of the students – the economic and social welfare of the students – and also we are heavily involved in the professional development of the graduate students – we ran more than one hundred short courses and workshops last year which is quite a record I think. And finally I would say that we are trying to create an elegance of “all togetherness”, so in other words we are trying to have a very active and fully engaged community, which I think is really important for most of our graduate students, especially those which are cornered with lots of theses and lots of tasks to do and they don’t have the opportunity to hang out and find friends and have this sense of belonging as much as they would have if they were doing undergrad studies.

LP: Why do you think it’s important that we have a graduate student association as well as the University of Melbourne Student Union (UMSU)? What’s the importance of having a separate body?

SK: As I said, the professional development is something that we’re heavily involved in and very concerned about because most graduate students — just because of that short term that they have here — are worried about all different types of development they could have: not just studying a specific field, but to have broader experiences like leadership, management; knowing about the community, feel like they are involved not only in their departmental community but in Melbourne and Australia. So professional development can be something from how to do your coursework, how to write your thesis, up to what you can do with your graduate studies to become a productive member of society. So these are sort of services that graduate students are really looking for, to be offered at the campus, because they don’t want to go elsewhere to find different opportunities. All our courses are subsidised, but some of them are free — it varies. So we try to have this accessibility issue in mind when we’re designing those courses as well.

LP: I’m sure you’re probably aware that UMSU recently passed a motion suggesting it would “negotiate with the GSA in relation to future structures to support student representation”.

SK: I’ve heard about that.

LP: So, what’s been on the agenda for the GSA this past, since Jim Smith got elected? Are you intending to continue on with the same kind of campaigns that he’s been running, or have you got some specific goals that you want to try to bring in to achieve while you’re President.

SK: I think the thing is the President is only someone who’s leading the Council, but all the decisions, all the campaigns, whatever GSA does is the unanimous decision of the whole Council. So, it doesn’t really matter who the President is in terms of what the future direction of the GSA is, because the Council would decide on that. So, in the capacity of the president, I might be able to propose a couple of things, which I have to do to as part of my duties, but at the moment I think what we are doing is really great. We are effective and efficient, but there might be a couple of you know, sort of tactical changes—not necessarily strategic changes—but yeah at the moment I think things are going on smoothly and well.

LP: Perfect. OK. So what are you most looking forward to accomplishing as President?

SK: First of all, I’m really humbled and honoured to be serving as the president of this very prestigious graduate student association at one of the finest universities in the world as I said. And that is a personal achievement, but for me it’s not all about personal achievements. I think I have a responsibility towards the community that I’m part of, which is the graduate student community but also the larger community. So one of the main issues we have at the moment is the public transport issue, which, well, we started the campaign at the start of March, and since then we’ve received more than 1200 signatures on the petition, more than 100 signatures every day. So I think that’s one of the most significant issues that I want to sort of put as my main priority, as my first priority to pursue.

LP: So my sense around the university—and this might not be your aim—but lots of undergraduate students have no idea that the GSA even exists. Do you think it’s important that people at the university who aren’t graduates, especially ones who might potentially become graduates know about the GSA and what it does?

SKLP: Okay, what’s one thing that you think every student should do while they’re at University, one thing you think graduate students should do before they graduate?

SK: That’s a very general question. So, I can give you an answer not in the capacity of President. My main obsession about life is that the fact that it’s really meaningless and pathetic and full of pain and suffering and you know, it’s, there’s an irony at the heart of it: we try really hard, although it doesn’t mean anything in the end. So I think if all the graduate students can find a way to distract themselves from the fact that they’re going to die soon, and find an antidote for the emptiness of existence, that would be a great achievement during graduate study. But it has nothing to do with me being the President of the GSA, it’s just a very personal take on that question.

LP: Good good. OK. That’s probably it from me, other than: is there anything else you wanted to add, is there anything you really want people who are going to read this to know about either you, the Presidency, the GSA, or the University?