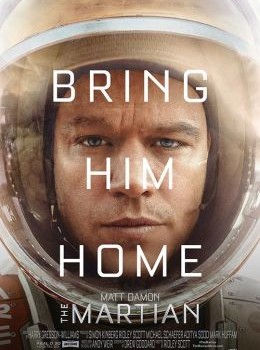 Matt Damon learns to live on Mars when his team ditches him for dead in a freak storm. That’s the film. But it’s laugh out loud funny and full of wicked cool survival techniques (y’know, in case you’re ever stuck on Mars). It’s also intriguing and warm, and as with all films set in space (except Mission to Mars), it really, really makes you want to send a letter to NASA and demand they restart manned exploration missions.

You’d think 2.5hrs of basically just watching Matt Damon on screen would be dull as shit, but somehow, with self-effacing humour and a bit of snark, he keeps our attention the whole way through. If Eddie Redmayne weren’t necessarily going to win for The Danish Girl because ooooh-playing-a-girl or Leo for Revenant because it’s-been-too-long-and-he-hasn’t-won-yet, and if the Academy were a little less serious, Damon would’ve taken the Leading Man Oscar this year.

Oscar’s hopes? Maybe in a small, tech category, though it’d be nice for a stalwart like Damon to take Best Actor in an upbeat film.