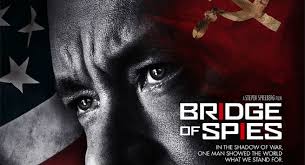 This film is the quintessence of Cold War spy drama. It’s got story fragments going everywhere and only some of them come together at the end. It’s complicated, half in German, and really, really cold. An American is taken prisoner by the Russians, and there’s some attempt to get him back.

There’s no real effort to hide where the story’s going, or how it’s going to turn out, because for those who lived through the time, the end result is known before the theatre is entered (and no, it’s not quite as simple as “America wins”). However I wouldn’t be surprised if the incredible and unnecessary complexity of the plot made many viewers question their memories.

The film is beautifully put together, and the acting is brilliant, but it doesn’t really work for a multitude of reasons. Most of those are summed up in “too complicated” and “bit boring”. Worth a watch if you like Tom Hanks or dark scenes in the snow.